“From the seven hills to the seven steps” is the name of our project, and after a lot of organization, 20-day trip and about 1000 km we are finally making our first important step: ascending Col de la Bonette, the highest Europe!

The morning of Colle della Lombarda (the pass that will lead us to Bonette) ascent our worries about have not diminished. At the camp site everyone who knew about our ascent of the pass with such heavy loaded bicycles, said it was not going to be a great challenge! Above all of them Sergio, a 70 years old man who still, every single afternoon, wears his cycling suites to ride the bike for a few kilometres. He tell us he has never reached the top of Lomabarda, he “just” arrived to the Sanctuary of Sant’Anna di Vinadio, the highest place in Europe at 2035 meters above sea level (instead Vinadio is located at 904 meters) therefore he knows the climb quite well and describe us every single meter, and every single meter scares us a bit.


We go to sleep relatively early and in the morning at 8 we are already on the bike, on the street (the very first time we start cycle so early!). The first part of the road, from Pratolungo, seems to rise quickly but gently. From Sergio description we know this is the easy part, the hard yet has to begin. As soon as the hairpin turns end suddenly a long and steep slope begun 7 kilometres with an average grade of 7-8%. The amazing landscape helps us to face this hard ascent. The road follows a river and it’s nestled between in towering walls and a pleasant forest gives us shelter from the sun. But suddenly the forest ends and the view opens over the valley and the rest of the ascent. Very high hairpin turns, a long and steep winding road so busy for being in the mountains. So many cars, motorcycles, trucks, busses and cyclists who are totally astonished by our presence there. They can hardly believe we want to reach the top with our heavy loaded bicycles. So they encourage us screaming mostly in french (still they can’t believe we are italian!) “courage”, “you are great”, “bravo”. 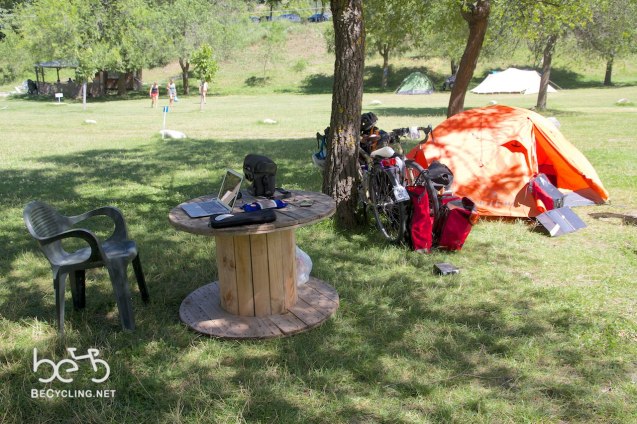 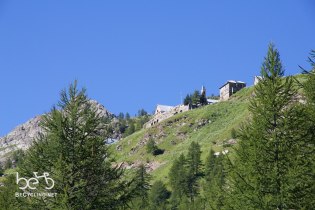 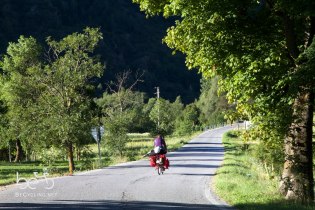 Starting the climb in Pratolungo

The climb is so hard that we have to stop several times to gain new energies. And it is while having a rest along the road that we meet Tino and Cate. Sergio, the old man from the camp site, sent them to check if we are fine! They follow all our ascent by car and wait at the top of the pass with a restoring sandwich and hugs. The climb of the pass has been so hard that it is really difficult to explain the great satisfaction for reaching the top, especially considering we are the only cyclists with panniers! As usual the descent is much quicker than the ascent, in less than an hour we were in the french valley, in Isola, the descending road is so steep that we have to stop a few times to cool rims. France welcomes us with a nice cycle path along Tinee river that brings us to Saint Etienne de Tinee. It makes us so proud to think that we started the day at the altitude of 904 meters of Vinadio, climbed up to 2.340 metres of Lombard pass and cycled down again at 800 meters of Isola and climbed up to the 1.100 meters of Saint Etienne, all in the same day, all with 50 kilos of bicycle! 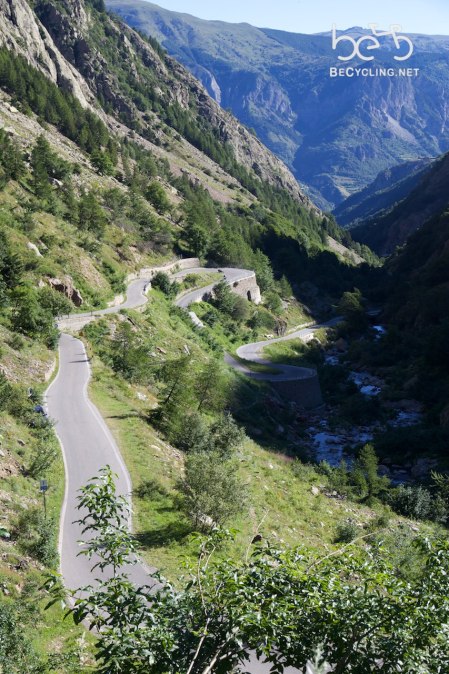 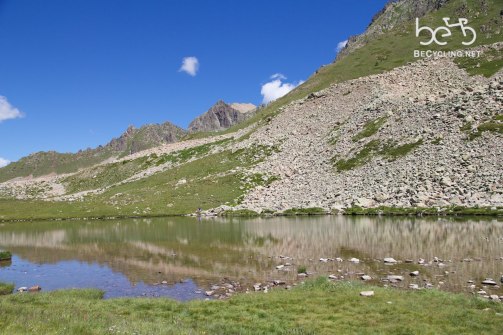 Few kilometres to the top 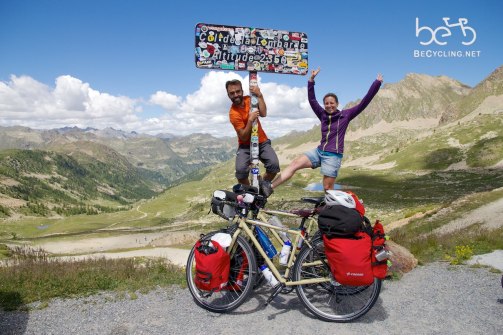 We arrive in Saint Etienne that is almost dark. We stop in the center to buy some food and ask information on the closest camp site. While looking for the food market we noticed two ladies intrigued by our bicycles. They noticed we are carrying a big weight and therefore they want information on our project. We chat a bit and one of them, Vivienne, decide to show us the camp site but she so worried about what we are going to face (Col de la Bonette) that on the way to the camp site she offers us to sleep in an apartment that usually use for rent, she wants us to gain energy before the great ascent! She not only offerd us a comfortable bed but she also cooks a delicious dinner. Our first day in France could not have been better. While chatting we find out that she and her friend, Lisette, are planning to cycle in the valley that brings to Bonette the very same morning, so we decide to go all together. Vivienne and Lisette are close friends, both are nearly 60 years old and Vivienne has started to cycle along the rough roads of the National Park of Mercantour only 3 years ago! 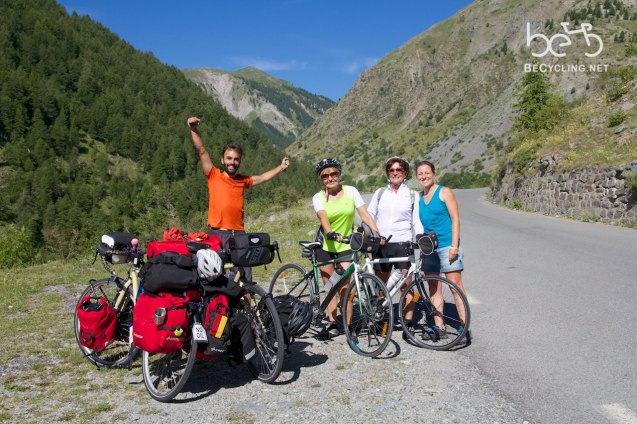 Heading together to the pass! 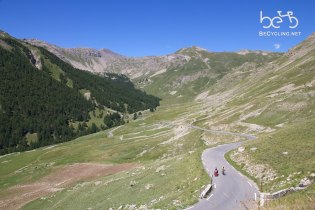 Simona and Lisette cycling together 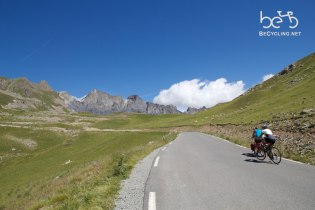 The summit gets closer and closer

The day has arrived. In the morning the four of us are on the street, Vivienne and Lisette chat a bit and then declare they want to join us in the ascent, they will cycle until for a few miles with us. It is a very hard ascent so they will do just few kilometres, at least this is what they’ve said at the beginning..We begin the long and fateful dreamed rise to the highest pass in Europe. Our legs are still affected by Lombarda, but luckily the first few miles seem to go up gently. Hairpins, few steep slopes but it is clear that the Bonette has yet to begin. After few steep hairpin in the wood, we pass a waterfall and we enter a plateau, where the view opens onto a lovely valley. Although we are very high the top, in other words the pass, is still hidden. Vivienne and Lisette repeatedly say they want to stop and say hello, and instead they are still here, behind Simona ready to encourage and support us. Together we reach Bousiéyas, a small village located in the middle of the ascent just after a very hard 8%! Here is where Vivienne decides to stop, she is very proud for the achievement. 61 years old, cycling only from 3 years and has just rode along 11 hard kilometres! Lisette instead decides to take advantage of our presence to try to reach the top, in all these years she has always stopped at the same point, but now she wants to go farther.

We rest a bit in Bousiéyas and then leave again. From this point onwards the Bonette is a never ending ascent. Steep hairpin turns, long slopes. The average grade is always the 7/8%, even where it seems to flatten it really is not less than 5/6%. Other hairpin turns, the road reaches 9/10%. It gets harder and harder we have to stop a lot of times to breath again, but the La Bonette summit, a rocky piramid, is now in sight but doesn’t seem to get closer even though we keep cycling. The last kilometres are the hardest, the weight we’ve been carrying in the past 20 days seems to get heavier and heavier at each pedal stroke. Finally we reach the geographic pass at 2.715 meters but the road continues for 1 kilometres to reach the altitude of 2.802 meters, the highest in Europe. 1 kilometre and we are there, our first goal will be reached! We eat a banana, take some time to enjoy the view. It’s a marvellous day, blue sky, some white clouds and the view is breathtaking. So far the ascent has been really challenging and the last kilometre doesn’t seem to be easy. Lisette in the mean time has reached the top, she so happy she made it and she said she had to stop 10 times in this very last kilometre, and this is not reassuring. But we are almost there, we have to do it even though we are totally shattered. Therefore we collect our last energy and saddle up again, to cycle the 1 kilometre to the top of our beginning dream. 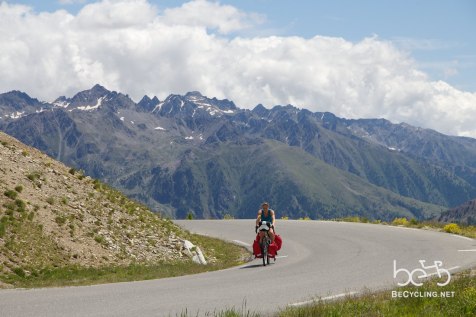 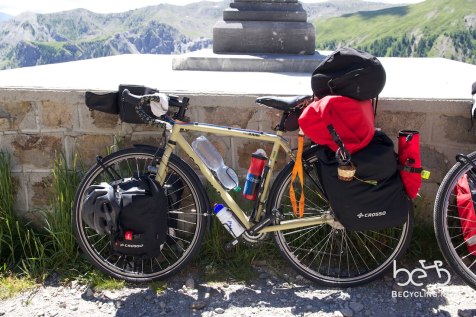 The first 600 meters are so hard, 10% grade, and we are so tired that Simona decides to push the bicycle instead of cycling. Daniele instead cycles up, he reaches the top of La Bonette after climbing a 12% grade, bringing in the top of the Bonette and climbing a hill with peaks at 12%, himself and a weight of more than 40kg! Once at the top tears come out, we are crying for the exhaustion, the fear of not succeeding and the joy for having done it! 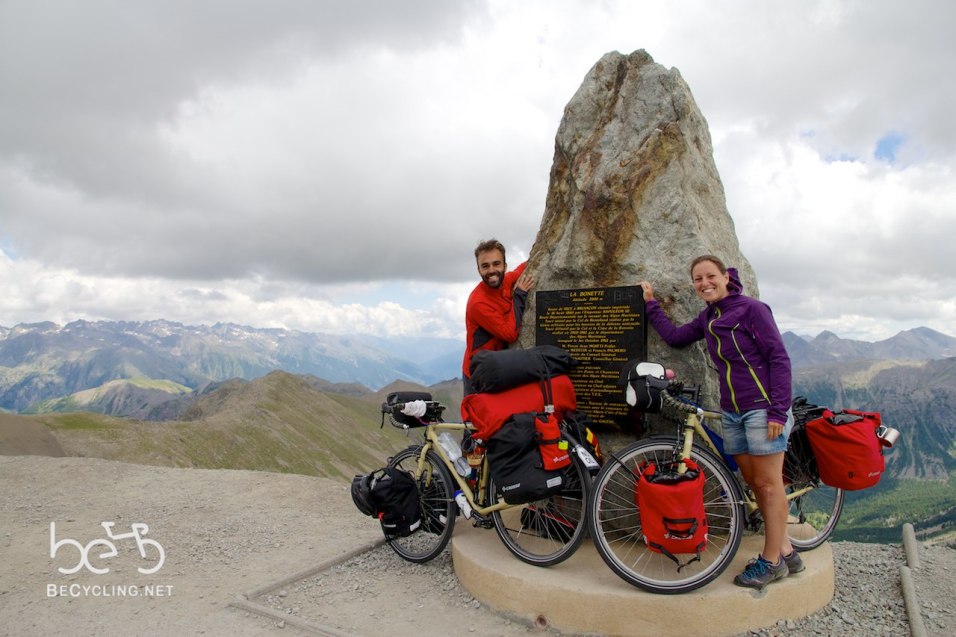