Because the responsible travel starts from home and returns home (it a cà = are you home? in Bolognese dialect), any place you call home, any to-be-reached Itaca, where the route and the way we set off count more then the destination.

From June the 6th to the 8th we’ve been on ITACA Island, in Bologna, together with travelers, wayfarers and migrants. Dreamers like us, willing to make the world a better place for those who host and those who are hosted, creating a profitable tourism whose benefits are for both the operators and the hosting countries and peoples. AITR (Italian Association of Responsible tourism) is a concrete reality, maybe the only association that really is involved into promoting events and initiatives, whose aim is to find a new meaning of the word “tourism”. As, for example, the guide of Lampedusa Island, born from the cooperation with Lampedusa Prime Citizen, with the will to improving tourism during off peak season, and the promotion of the campaign Don’t Look Away by ECPAT, to fight child-sex tourism industry in countries like Thailand or Brazil (where the FIFA wolrd cup is nowdays on). 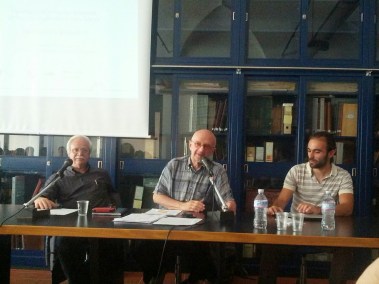 Presenting our project at AITR meeting Presenting our project at Bologna citizens Presenting our project at Bologna citizens

There’s an italian tourism market that does not take part into those famous touristic fairs, that does not consider tourism as mere money-maker industry. There’s a reality in Italy that speak the words cooperation, sustainability and responsibility in a market that is still strongly linked to money. This reality is IT.A.CÀ, and is made by all associations that are part of it and that since 5 years organize the Festival of Responsible Tourism in Bologna. We are proud to be Ambassadors of Responsible Tourism as we are proud to bring with us around the globe all these associations.

(for full screen push the button high on the right corner)

We wish to thank the city of Bologna for welcoming us, AITR for having organized this event and for having invited us to participate, Salvaiciclisti-Bologna for showing us what a bike friendly city is, and thanks to all those persons we met and that shared with us the enthusiasm of our crazy project.

As you set out for Ithaka
hope the voyage is a long one,
full of adventure, full of discovery.
[quote Kostantin Kavafis]